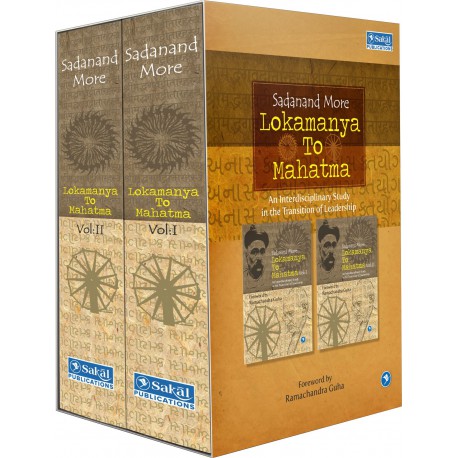 Lokamanya to Mahatma is a colossal work of scholarship, at once very deep and extremely wide. Deftly translated from Marathi by Abhay Datar, this two-volume study covers an astonishing array of themes. It is sociological, investigating the politics of caste, community and region.

Maharashtra gave Gandhi his guru, Gopal Krishna Gokhale; his most devoted and scholarly disciple, Vinoba Bhave; and his murderer, Nathuram Godse. And there were many other connections that this great Gujarati had with the state that bordered his own. From the time he visited Pune in 1896 to his assassination more than half a century later, Gandhi had close, and sometimes very contentious relations with Maharashtra and Maharashtrians.

Sadanand More’s magisterial work takes as its overarching framework the relations—at once personal, political and philosophical—between Gandhi on the one side and Gokhale’s great rival, Bal Gangadhar Tilak on the other. As More writes early in the narrative: ‘The process of transition from Tilak’s leadership to that of Gandhi’s was a traumatic and painful experience for Maharashtra. There was discord not just between families but within households as well.’ This conflict between Tilak and Gandhi, he further notes, ‘lies at the heart of the history of Maharashtra’, and therefore, unless the conflict ‘is understood in its entirety, it would certainly be difficult to understand Maharashtra’.

Lokamanya to Mahatma is a colossal work of scholarship, at once very deep and extremely wide. Deftly translated from Marathi by Abhay Datar, this two-volume study covers an astonishing array of themes. It is sociological, investigating the politics of caste, community and region. It is literary, exploring the meanings of dozens of plays, poems, and novels. It is intellectual, analyzing the rhetoric and arguments of major as well as minor political figures. It is biographical, exploring the career paths of many influential and interesting individuals. It is political, documenting the trajectory, not just of the Congress Party to which both, Tilak and Gandhi belonged, but also the trajectories of the Hindu Mahasabha, the Muslim League, the Communists, and the RSS. It is pan-Indian, skilfully integrating the history of princely states with that of British India. At times it is also global, paying attention to major developments outside India, such as the Russian Revolution and the rise of pan-Islamism that had resonances for the political life of the subcontinent.

Lokamanya to Mahatma has rich discussions of disputes and arguments between individual politicians, their parties, and their ideologies. These multiple strands are woven together by the historian as a master craftsman. The narrative rarely flags, the readability enhanced by the remarkable range of sources that the book uses. Sadanand More has consulted government records, newspapers, pamphlets, plays, memoirs, biographies, diaries and more. His command of Marathi sources is staggering, but More has also read and digested all the relevant secondary literature in English.

Sadanand More observes that, as genuinely all-Indian leaders, Tilak and Gandhi had no peers in the British period. As he writes: ‘The term ‘Gandhi’s Muslim followers’ for example, would not astonish anyone, while the term ‘Jinnah’s Hindu followers’ or ‘Savarkar’s Muslim followers’ would raise eyebrows or evoke laughter’. Tilak was not of course followed by as many Muslims as Gandhi, but he did have some very influential admirers among that community, most remarkably, M. A. Jinnah.

Among the many hallmarks of this book are the subtle comparisons between its two central figures. Thus More writes, on their formative influences: ‘Both Tilak and Gandhi thought, functioned and acted within the framework of tradition. But in the case of Tilak, his caste background and status as also the Brahminical influence and upbringing of his younger days meant that he leaned towards tradition more than Gandhi did. … While Gandhi in his younger days had been brought up in an atmosphere suffused by the influence of Vaishnava and Jain religious traditions, he, unlike Tilak, had never been influenced by the orthodox Hindu scriptures. Besides, Gandhi went to and stayed in England and South Africa early in his career and hence became acquainted with Christian, Muslim and modern religious traditions’.

Again, while commenting on their respective worldviews, More remarks: ‘Tilak, who otherwise deeply involved himself in the interpretation of the Geeta, and emphatically proclaimed that he was a Vedic Hindu, knew that politics was a distinct domain of human activity with an equally distinct value system, and was of the opinion that religious principles should not be brought into politics’. On the other hand, ‘Gandhi refused to compartmentalize human life into discrete segments. His principled position was that whatever was inconsistent with religion or ethics should not be allowed into politics’.

On their differing religious philosophies, More comments: ‘For Gandhi, the real debate in the domain of religion was the one about whether violence or non-violence should be accorded primacy. For Tilak, the conflict lay between action-orientedness, on the one hand, and on the other, the attitude of detaching oneself or retiring from the world, or to put it simply, between action and renunciation’.

Meanwhile, on the characteristics that these two patriots shared, More says: ‘The fact that both Tilak and Gandhi could emerge as national-level and all-India leaders means that the two shared some leadership qualities in common. One of these qualities was undertaking many tasks at the same time and performing them with equal promptness’.

On the varying social bases of their politics, More observes: ‘During Tilak’s times, there was hardly any political consciousness among women. It increased much later, during the Gandhian period’.

Lokamanya to Mahatma contains a fascinating discussion of the respective, extended prison terms of Tilak and Gandhi. The author tells us what they read and wrote when in jail. In this connection, More illuminatively notes: ‘Gandhi was the prison-going disciple of Gokhale, who had never been to prison. A conversely similar example from within the Tilakite camp was that of N. C. Kelkar. Kelkar was the disciple of the prison-going Tilak, but one who never went to prison’. And he also writes, movingly and accurately: ‘The ability and willingness to undergo suffering as well as bear pain is an essential part of the character of great men’.

Beyond Tilak and Gandhi, this study contains many other closely observed portraits of individuals. We have here fresh perspectives on major all-India figures like Ambedkar, Jinnah, and Savarkar; and of people well-known in Maharashtra but not elsewhere, such as P. K. Atre and N. V. Gadgil. The cast of characters is capacious, and each portrait is sensitively done. My own particular favourites were the descriptions of the remarkable reformers V. R. Shinde and Sane Guruji, whose lives and legacies surely need to be better appreciated outside their home state.

As the narrative of Lokamanya to Mahatma moves beyond Tilak’s death in 1920, it focuses more closely on Gandhi, his supporters, and his adversaries. Sadanand More writes: ‘Gandhi was an enigma for his contemporaries. He could not be made sense of using any measure, whether old or new. Hence, he was variously regarded as a saint, a hypocrite, a mere Bania, a spy for the British, an ignoramus, and a shrewd political operator’. This is brilliantly put; and the book goes on to explore in rich detail the range of perceptions, impressions, readings and misreadings of Gandhi in Maharashtra. Particularly impressive in this regard is More’s fine grained analysis of the Quit India movement in Maharashtra and its unGandhian resort to violence.

While reading Sadanand More’s study, it struck me several times that there was a comparable book waiting to be written on Gandhi and Bengal, another province with which the Mahatma had complex and contentious relations. Thus More writes: ‘All the Maharashtrian opponents of Gandhi were unanimous that Gandhi was bereft of rationality’. One could say much the same of Gandhi’s Bengali opponents. A chapter dealing with the 1920s is called ‘Maharashtra Falls by the Wayside’. That was the decade when Bengalis likewise lamented that their previous political dominance had been usurped by Gandhi. Indeed, the case can be made that the hostility to Gandhi was even greater in Bengal, especially when the Mahatma’s acolytes intrigued against Subhas Bose when he was Congress President in the late 1930s.

Several chapters at the end of Volume 2 of Lokamanya to Mahatma deal with Bengal, placed in a comparative lens with Maharashtra. There is a companion work waiting to be developed - of the many-sided, multi-faceted, controversial relations between Gandhi and the province of Tagore, Aurobindo, C. R. Das and Bose. I wonder if any Bengali historian will rise to the task. I wonder if there is indeed a Bengali Sadanand More, with comparable intelligence, energy and erudition. Meanwhile, we can all, whether Maharashtrian, Bengali or neither, feast on this splendid work of scholarship that the original Sadanand More has offered us.

Be the first to write your review!